Beyond the Pfannenstiel: Minimally Invasive Incisions for Maximum Exposure 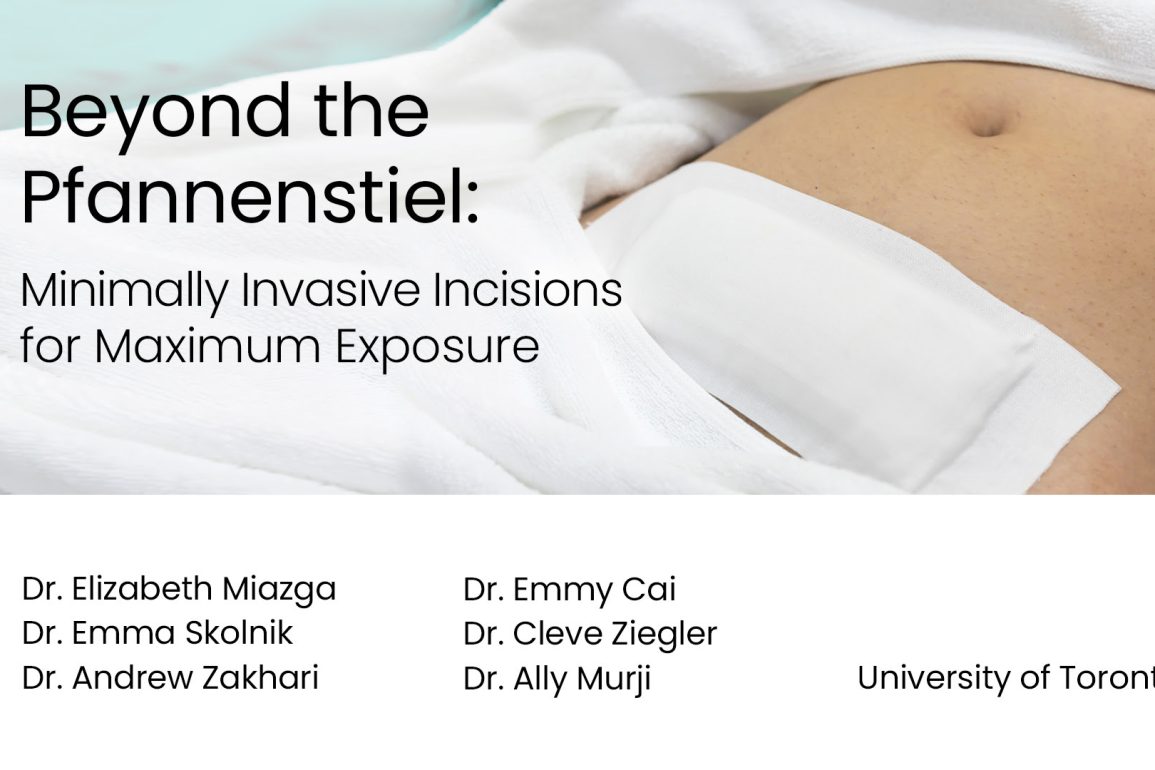 Gynecologists are most familiar with the Pfannenstiel and midline incisions for laparotomy. The Cherney and Maylard are two alternative transverse incisions. These are both muscle splitting incisions that retain the advantages of a low transverse skin incision while providing greater exposure to the pelvis.

The Cherney separates the tendinous attachment of the rectus muscles to the pubic bone and the Maylard transects the rectus muscle bellies. This video will review the relevant anatomy of the anterior abdominal wall for laparotomy and provide a comprehensive review of the Cherney and Maylard incisions including their detailed surgical steps and the decision making regarding the abdominal incision that is best suited for a given procedure.

Finally, we compare their advantages and disadvantages to other laparotomy incisions used for gynecological surgery.

Beyond the Pfannenstiel, Minimally Invasive Incisions for Maximum Exposure. Gynaecologists are most familiar with the Pfannenstiel and midline incisions. The Cherney and Maylard incisions are two alternative transverse abdominal incisions with unique advantages.

Both require splitting the rectus muscles and provide excellent pelvic exposure in addition to a number of benefits when compared to midline laparotomy, such as lower postoperative pain and risk of hernia and adhesion formation. The Maylard divides the rectus muscle bellies and the Cherney divides the tendons.

In this video, we will review the surgically relevant anatomy of the anterior abdominal wall, demonstrate the steps to a Cherney and Maylard incision, and discuss the advantages and disadvantages of both.

Both incisions start with a standard transverse skin incision which is made 2 cm to 4 cm above the pubic symphysis. In the subcutaneous fat, on the lateral margins of the incision, lie the superficial epigastric vessels. Deep to this fatty layer is the rectus sheath, which is composed of the anatomy of the aponeurosis of the external oblique, internal oblique and transversus abdominis muscle.

Standard transverse incision. This is typically made two to three finger breadths superior to the pubic symphysis. Electrosurgery is used to divide the subcutaneous fat down to the level of the fascia, making note of the superficial epigastric vessels, shown here. These are pinch burned before continuing. The fascia is entered in the midline, and a Kelly is used to elevate it off the underlying muscles as it’s divided in both directions until the linea semilunaris is identified, which marks the lateral border of the rectus muscle.

Divide rectus muscles. Once the fascia is opened, a Kelly is used to isolate the rectus muscles from the underlying tissue and elevate them. The muscles are divided with electrosurgery, layer by layer, paying close attention to the location of the inferior epigastric vessels coursing on the posterior lateral border of the muscle belly.

Ligate inferior epigastric vessels. Once these vessels are identified, the remaining muscle is transected and the vessels are isolated. The vessels can be controlled with electrosurgery or suture-ligated and transected. These steps are repeated on the contralateral side. Next, the peritoneum is incised transversely. The broad myomatous uterus is delivered relatively easily through the incision due to the exposure provided by this transverse incision.

Closure, re-approximate fascia. First, the peritoneum is closed transversally. Next, after ensuring haemostasis at the level of the inferior epigastrics and rectus muscles, the fascia is closed. As the fascia was not dissected off the rectus muscles initially, this will re-approximate the muscle bellies, shown here. The subcutaneous fat and skin are then closed.

To review, the Maylard incision divides the rectus muscles and inferior epigastric vessels. The main advantage of the Maylard incision is that it provides excellent access to the pelvic sidewalls. A recent Cochrane review showed equivalent rates of pain and post-operative muscle strength when comparing a Maylard to a Pfannenstiel incision. Care must be taken in patients with significant peripheral vascular disease, as the inferior epigastrics may be providing important collateral circulation to lower extremities.

At times, after performing a Pfannenstiel incision, exposure may be insufficient, and the surgeon may need to convert to a Maylard incision. In these situations, one must first suture the muscles to the overlying fascia prior to transection, as illustrated here. Knots should be tied anterior to the fascia.

We start with a standard transverse incision. As opposed to the Maylard incision, the rectus muscle is dissected off the anterior rectus sheath, shown here. With the Cherney incision, it is important to dissect superiorly to the umbilicus and inferiorly to the pubic bone.

As shown here, a permanent monofilament suture is passing through the undersurface of the anterior rectus sheath and brought to the rectus muscle tendon. All sutures are placed prior to tying, allowing the knots to be laid down without tension. The remaining closure is done in a similar fashion to the Maylard and Pfannenstiel incision.

In summary, both the Cherney and Maylard provide excellent pelvic exposure and all the benefits of a transverse incision.