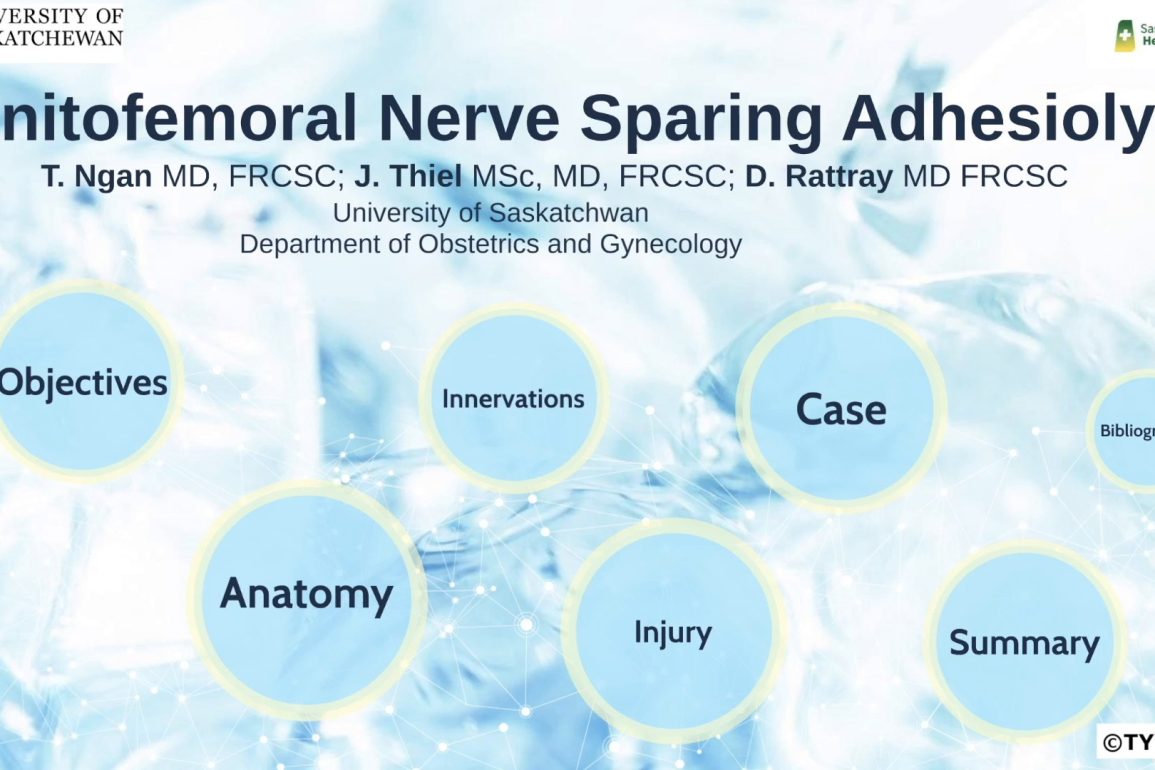 The Genitofemoral nerve originates from the ventral rami of L1-L2. Its injury is uncommon in benign minimally invasive gynecologic surgery.

However, when there is distorted anatomy due to adhesions or severe endometriosis, the risk of injury is higher. Therefore, it is important to recognize the anatomical landmarks early in the surgery to prevent injury.

In this video, the genitofemoral nerve location, innervation, and mechanisms of injury will be reviewed. The points will be illustrated by demonstrating dissection of this nerve in a case with significant adhesions.

The genitofemoral nerve originates from the L1 and L2 ventral rami. It descends in the substance of the psoas major and emerges at its anterior surface at L3 and L4. Then it courses downwards on the surface of the muscle in retroperitoneal position and crosses laterally, posterior to the ureter. It descends into the pelvis lateral to the external iliac artery.

The genitofemoral nerve divides into two branches, the genital branch and the femoral branch. The genital branch crosses the lower part of the external iliac artery and enters the inguinal canal through the deep inguinal ring, along with the round ligament. It innervates the skin of pubic mons and labia majora.

The femoral branch descends lateral to the external iliac artery and passes behind the inguinal ligament. It pierces the anterior layer of the femoral sheath and fascia lata to supply the skin of the upper anterior thigh.

The genitofemoral nerve has no motor function. The genital branch is responsible for the sensory function of the mons pubis and labia majora, and the femoral branch provides sensory distribution to the skin of the upper anterior thigh. Injury to these nerves can result in impaired sensation to these areas or, in the worst-case scenario, neuropathic pain.

Here, we present the case of a 32-year-old para three with known endometriosis. She previously underwent a caesarean hysterectomy for invasive placentation. She presented with severe chronic pelvic pain following the surgery. She failed numerous medical treatments.

Her symptoms were alleviated with a trial of GnRH agonist. After extensive counselling, she has consented for laparoscopic bilateral salpingo-oophorectomy and adhesiolysis.

Using a combination of superficial incisions, traction-countertraction, as well as bipolar and ultrasonic energy, the bowel was carefully dissected off the sidewall. The left medial umbilical ligament was used as a landmark. Gentle traction onto this structure was attempted to help in bowel dissection.

The push and spread technique was also applied to thin the fibrotic tissue connecting the ovary to the side wall. Once the left ovary was detached, a right oophorectomy was performed, followed by the removal of the specimen. The patient was given oestrogen postoperatively. Her pain significantly improved at her postop visit.

In conclusion, in the case of severe pelvic sidewall adhesions and the absence of a uterus, it is important to recognize pelvic landmarks such as the medial umbilical ligament, the external iliac artery, the genitofemoral nerve, the ureter and the infundibulopelvic ligament. This facilitates the identification of other pelvic structures and in this case, prevents injury to the external iliac artery and the genitofemoral nerve.